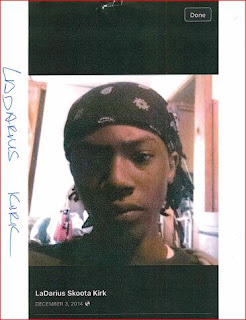 On January 14, 2016 officers were dispatched to South Johnson Ave concerning a person who had been shot. Upon officers arrival a male juvenile was found shot. He was transported to the Emergency Room at WMC for treatment. Moments later another male juvenile arrived who had been shot in the same incident. After talking to victims and witnesses it was determined both had been shot by Ladarious Kirk of Louisville. Anyone with information as to Ladarious Kirk's where abouts, please contact the Louisville Police Department at 662-773-3511 or Winston County Crime Stoppers at 662-773-9999.